macOS eases the multimedia content creation process due to its great features and accessible tools such as iMovie, GarageBand and QuickTime Player. Contrary to what one would think, QuickTime Player is more than a simple media player. It has basic editing capabilities like trimming clips and reordering/adding sequences on a single timeline. Even more interesting, it includes a sweet recording functionality. This allows to record audio, video from a webcam and, last but not least, a screen’s video feed from your computer(or even a plugged in iOS device)! One challenge that arises when recording your computer’s screen is to capture the audio from your microphone AND the sound output at the same time through QuickTime Player. Here is how to solve this using Soundflower and macOS’s built-in tools.

Let’s say you want to record yourself commenting your playthrough of a video game or you are doing a tutorial on using an audio editing software, you will want capture both of you speaking in the microphone AND the audio output of your computer. However, when using QuickTime Player’s screen capture, you can specify only one audio source.

As a result, you would either need to record the different audio sources separately and stitch them together in an editing software OR you can harness the power of some sweet macOS’s configurations.

First of all, you will need to install Soundflower, a kernel extension for macOS which adds virtual audio devices. This will allow you to capture your mac’s audio output and redirect it as an input source.

Then, we can open the macOS’s built-in MIDI configuration app, Audio MIDI Setup. You can see the 2 items Soundflower added, which can be used either as output or input device: 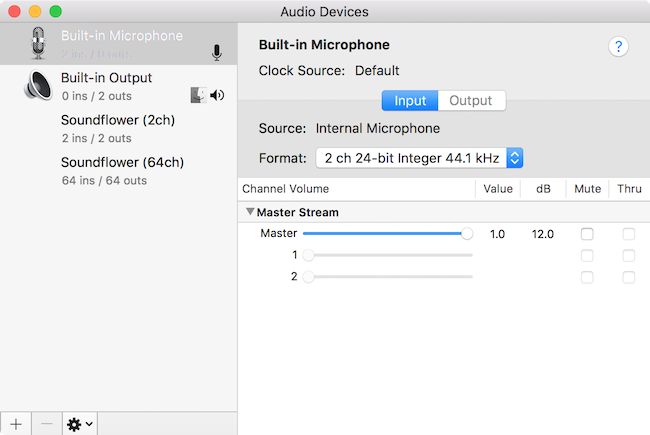 Now, we will configure 2 audio devices we need to capture our mac audio while recording using a microphone.

Here is a diagram of the configuration we created in Audio MIDI Setup. We can see that our computer will send audio to 2 different output devices through the Multi-Output: the built-in output(speakers or headphones) AND to the virtual device Soundflower (2ch). Then, the Input Aggregate merges 2 audio sources, the same Soundflower (2ch) virtual device AND the built-in mic(or from plugged in headphones equipped with one, such as Apple’s Earpods). So, the software using our custom aggregate device as an input source will receive both audio signals as one.

If you navigate to System Preferences > Sound, you will see the input and output devices we created and you can select which one you want to use. It’s also a good idea to check the box Show volume in menu bar, because you will be able to quickly the appropriate output device.

At this point, we are ready to test our setup. We can use our recording software, for example QuickTime Player, and simply select the Soundflower Aggregate Input as the source device. You must also set the Soundflower Multi-Output as you mac’s output device(using System Preferences or the Sound menu bar item).

It’s important to note some caveats I found with this method.

Voilà! You are now able to record your computer’s audio and your microphone simultaneously. You could also play around with the Audio MIDI Setup and tune the settings to your need, removing the microphone from the Aggregate Device, for example, if you don’t need a mic input.